The more we read about artificial intelligence, the more we wonder if it will simply be like ourselves, only improved. Here’s a 2010 video of film critic Roger Ebert demonstrating his new voice; Ebert lost his own from thyroid cancer. By using the CereProc service to sample tones from his prior recordings, Ebert was able to recreate most of his mellifluous cadence. Imagine a future where a digital avatar could speak for you.

The best book on marketing ever written was “Positioning: The Battle for Your Mind.” In it, Al Ries and Jack Trout wrote, “In our overcommunicated society, very little communication actually takes place. Rather, a company must create a ‘position’ in the prospect’s mind. A position that takes into consideration not only a company’s own strengths and weaknesses, but those of its competitors as well…”

– “To be successful today, you must touch base with reality. And the only reality that counts is what’s already in the prospect’s mind.”

– “The basic approach of positioning is not to create something new and different, but to manipulate what’s already up there in the mind, to retie the connections that already exist.”

– “To cope with the product explosion, people have learned to rank products and brands in the mind. Perhaps this can best be visualized by imagining a series of ladders in the mind. On each step is a brand name.”

– “A competitor that wants to increase its share of business must either dislodge the brand above (a task that is usually impossible) or somehow relate its brand to the other company’s position.”

Nicely done, Samsung. This works much better than T-Mobile’s recent attacks on Apple (which just try to make Apple look dumb and shamelessly mirror the “I’m a Mac” campaign) because Samsung recognizes Apple has avid fans. You likely see yourself in the line outside the store. Samsung is almost saying, that’s cool, we get it, fanboys — but, just one thing, we’re also cool, perhaps cooler, with a bigger screen and a really new, unique product, so why not take a step over to our brand ladder? Hmm.

Positioning is an old strategy — Ries and Trout first wrote about it in 1972 — but that doesn’t mean human psychology has changed. 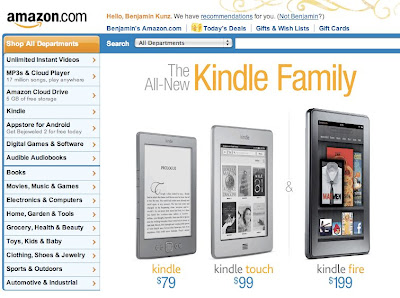 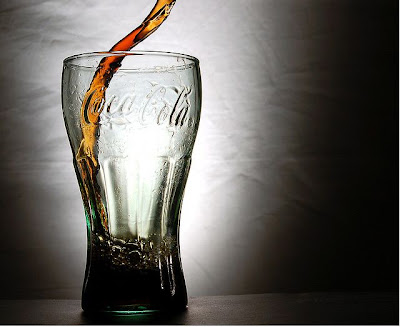 It’s curious how gun-shy digital networks are about running advertising. Facebook famously held off on traditional banners, inventing its own not-so-intrusive tiny promos at the side, and now Google+ insists it will skip ads. The most amazing restraint I see is the Facebook mobile app — imagine, with 350 million active FB users staring into smartphones, and Facebook holds off on monetizing that audience.

All of this indicates that consumers now hate advertising — why skip ads unless you’re worried it will degrade your networked product? Advertising works, of course (we plan it for clients), and traditional television media that carries advertising still remains king, with consumers watching 4 hours and 44 minutes of television a day on average in the U.S. But “watching” is an overstatement; studies by Nielsen and Pew show consumers actually do two or three things at once with TV or radio on in the background. In-home observations show that when TV spots appear, consumers pick up laptops, handsets or magazines, and attentiveness slides. Put another way, the typical consumer is exposed to about 160 30-second TV spots a day, and of course none of us really “see” or recall most of them. The radio industry has the same problem; data from new Portable People Meters, which replace the old diary journals to tabulate radio ratings by picking up signals embedded in broadcasts, show people tend to switch the radio dial as soon as radio spots intrude.

So new communication networks, trying to gain mindshare in this cluttered space of media options, are very careful not to diminish UX with advertising — almost comically so. Twitter could easily push ads into its stream (and is just starting to roll this out), but has been scared to death that degrading the Twitterer experience might chase users out of its network. G+ could easily provide personalized sponsored links at the right of its pages, but for now, says it will hold off.

Why the fear?
Advertising works; it educates consumers and drives billions into the economy. But at heart, consumers find it a pain in the ass and are migrating to new channels that avoid it. The danger I see is if marketers cannot influence you by clearly putting their messages in an ad box, they will try more nefarious routes of embedding the message into other content — sponsored tweets, paid posts, advertorial — that degrades the actual content we hunger for itself. You’re starting to see this with top bloggers bragging about Kmart shopping experiences or GPS gadgets that actually pay them for mention, and the result is confusion. Is the message true? Doe someone I respect like that product? Or is someone just putting their self interest ahead of mine, giving me a message that may not have meaning? The value of advertising is it clarifies the source of the message, allowing consumers to clearly judge the content by knowing it is meant to influence. A catalog is selling you; you know that; so you look and judge the material by its source merits. Alas, if marketers and people can no longer be clear about their intent to influence you, they may resort to trickery, subterfuge, embedded lies, and that form of pollution may degrade our experience far more than little ad boxes at the side of the stream. 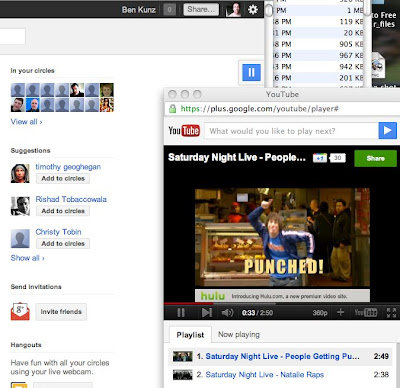 Yeah, you likely know about the YouTube button at the right of G+, allowing you to stream television while chatting or working in Excel or doing whatever on your computer. But why? Why would Google make TV part of its supposed social media play?

Because TV remains king of all media. U.S. consumers watch about 500 billion hours of television each year vs. 70 billion hours on the Internet — which works out to 5 hours of TV a day on average per person. Of course, “watching” is not really what happens; the latest studies by Nielsen show that nearly half the time TV is on consumers are doing something else such as eating, laundry, or playing on, yes, the computer. (Somehow Nielsen left out “sex” as a finding, making me question the validity of the research instrument, but let’s go on…) This doing two things at once is called concurrent media use and it is what you are likely doing now, reading this post with the TV or radio on in the background while checking your smartphone and telling your lover hey, just a minute.

Concurrent media use is the hottest trend in all media. For proof, look at any teen.

So here comes Google, giving you TV as a sidebar … making it even easier to do what you want to do, kindascanning video while playing online or texting on the iPhone. There are huge dollars at stake if anyone can tap video consumption while meeting this human need to intake/output communication in multiple channels at once. More than $70 billion is spent annually by advertisers on television spots in the U.S.; surely Google would love to carve off a piece of that pie. So that pretty white-and-red YouTube button teasing you at top right is not a free giveaway; it’s Google’s chance to get the 40 million G+ users to drive more ad revenue its way.

And who’s to complain? It’s what we want. Google’s play is brilliant, and more similar plays are likely to come from Apple and Facebook and video apps. If I were a cable conglomerate, I’d be a little nervous. Now, back to SNL. 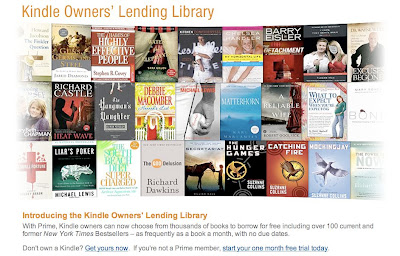 About 5 million of Amazon’s 121 million customers subscribe to Amazon Prime, a $79-a-year service that covers “free two-day shipping” (we repeat, $79 covers free shipping…). If you thought that pricing move was brilliant, now consider this: Amazon is adding the ability to borrow one book for free a month if you subscribe to Prime, provided you also own or buy a Kindle. That’s right: Amazon is giving away its core products for free.

Is Amazon crazy? Of course not. This move will only accelerate its 58% annual growth rate.

1. Amazon has been pushing Kindles for years, but suddenly faced huge competition from Apple’s sexier iPad. Amazon just caught up with the Kindle Fire, just as colorfully sexy with a kinder price point of $199. But Amazon needs to ramp its push into the tablet market, since today’s mobile hardware leads to Amazon vs. Apple sales ecosystems.

2. People who buy Kindles are avid book readers — and likely to want more books than one free rental a month. So the giveway is unlikely to cannibalize many sales. If anything, luring readers back to the Amazon.com portal each month could increase sales as these avid readers traipse through the Amazon candy store.

3. People who buy Amazon Prime only recoup the $79 annual fee if they order a lot of merchandise — perhaps two orders a month. Given an average order size of $25 (guess), Amazon is locking in $600 a year in orders plus $79 in service fees if it convinces you to spring for “free shipping.” And if you don’t buy anything, you pay $79 for nothing for a tidy Amazon profit margin of 100%.

4. $679 a year per customer is a pretty sweet deal for Amazon; so no wonder Amazon gives away a $5 book value and some free movies as well for anyone who signs up for Prime and also buys a Kindle.

Amazon is simply rewarding its best, most-valuable customers with an offer that will get them to accelerate their spending, lock them in further with Kindle hardware, and sustain future profits all while fighting off the iPad.