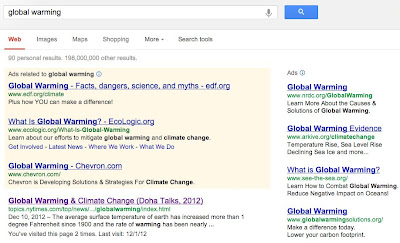 Mention climate change and you’ll get hot responses from some conservatives who believe the risk is falsified, earth’s temperatures are not rising, satellite data is fudged and human-made CO2 and methane don’t absorb heat from the sun. Some liberals leap far the other way, accusing energy giants such as ExxonMobil of mendacious disinformation campaigns bent on disguising global warming. Climate change is one of those issues that, like the fiscal cliff in Congress, leads to more finger-pointing than problem-solving, with each debate participant letting his or her worldview color the facts.

Chevron has its own strategy: cut through the denial and talk straight about the issue.

Type “global warming” into Google and the third sponsored ad you’ll see is from Chevron, inviting you to a webpage describing how it is concerned about global warming and working to build cleaner energy solutions. On its landing page, Chevron pulls no punches: “At Chevron, we recognize and share the concerns of governments and the public about climate change. The use of fossil fuels to meet the world’s energy needs is a contributor to an increase in greenhouse gases (GHGs)—mainly carbon dioxide (CO2) and methane—in the Earth’s atmosphere. There is a widespread view that this increase is leading to climate change, with adverse effects on the environment.”

Wow. This is a bold statement from an energy giant with a $209 billion market cap. Most politicians don’t have the guts to talk like this. Why is Chevron pushing such assertions to the world? Well, first it could be a lure to investors — if half the population does believe that scientists can count and earth’s temperatures are rising, those investors are more likely to place funds in a company they believe may do something about it. Chevron could also see that energy will change, and be positioning itself for leadership in emerging markets for wind, solar, thermal, fracking, cleaner coal, carbon recapture, or other new technologies that might someday give old carbon technology a run for its money. (Chevron has run copy such as “It’s Time Oil Companies Get Behind the Development of Renewable Energy.”)

And of course running ads inside Google searches for “global warming” means you’ll only be talking to people hunting for the issue, in essence partitioning off environmentalists with their own communication stream. But I don’t think that’s it. Chevron’s main tagline is now “The Power of Human Energy: Finding Newer, Cleaner Ways to Power the World.” ExxonMobil by comparison offers the comparatively bland “Taking On the World’s Toughest Energy Challenges.” Chevron is becoming the 7Up to ExxonMobil’s big cola. It’s a crisp, clean, different alternative — explaining that energy is not good or bad, but rather an evolving spectrum, headed for cleaner solutions. Chevron is focused on a multi-billion-dollar emerging energy market. At least for branding, that’s a warm story.