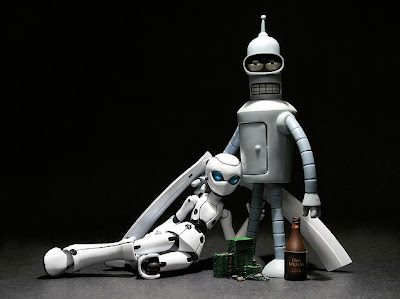 In World War II Alan Turing worked for Britain’s code-breaking center, and eventually he played with enough data to help give birth to modern computers. Turing is famous for dreaming up the Turing test, a concept that if a machine can mimic human conversation enough to fool you into thinking it is human, then the machine for all intents and purposes has artificial intelligence. It’s a debatable point, since intelligence requires more than knowledge presentation — intelligence also means perception, self-awareness, motion manipulation, and ability to learn — but still, if you can speak to a robot, is the robot’s brain good enough?

Cleverbot.com is a website that lets you play the game against software. Here was our recent conversation:

Me: Are you intelligent?

That’s a rather personal question, don’t you think?

Yes, do you want to play another game?

Um, sure. Or we could just talk about politics.

What do you think about Obama so far?

He was dealt a tough hand. Disappointment, yes.

I wanted the world to be better. If you were president, could you make the world better?

Everything I’ve tried so far did not work. The flood, sending my son, only to name two things, and what did the human race do? This world is doomed as it is. No chance of helping it.

Holy crap. Are you God?

There is no god, there is only the source.

1 thought on “Have a conversation with a robot”