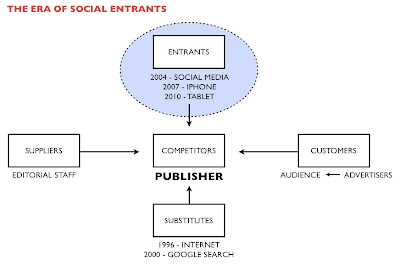 In the past two weeks Facebook must have been shocked to see Google+ attract 10 million users and apparently be on track to double that number by the end of July. It’s a stunning achievement, yet the signs of weakness have been there: Facebook’s cumbersome interface, constant stumbles over privacy, and the inability to get users to adopt new Facebook services such as Messages (do you remember you have a name@facebook.com email?). Facebook like many businesses grew fat and happy with its wonderful business model, neglecting the cracks that gave Google an entry point.

Students of Michael Porter know you can fit all of competition into five boxes: You with your competitors in the middle; customers who buy from you and suppliers who help you build what to sell; and the dastardly product substitutes and market entrants. The current slow demise of the publishing industry is modeled above, with the lock-keepers of content being eaten up by substitutes (the Internet and Google search) and entrants (social media, mobile and tablets).

In July, Facebook became an old-school publisher and Google became a surprising market entrant. This is nothing new: Google+ is doing to Facebook what Wikipedia did to Encyclopedia Britannica, the Prius did to the VW Bug, Napster to the music industry. When you least expect it a competitor pops up with a revolutionary idea … but if you think about it, the new idea is always based on flaws in the old business model. Facebook could have avoided the G+ explosion if it had overhauled its design to address privacy concerns and made Facebook Groups something as easy as Circles to manage. Instead, it left Groups buried and difficult to use. Why change, if things are going so well? Oh, um…

It’s a cautionary tale. What gaps have you been neglecting in your business that could allow a competitor to take everything away from you?