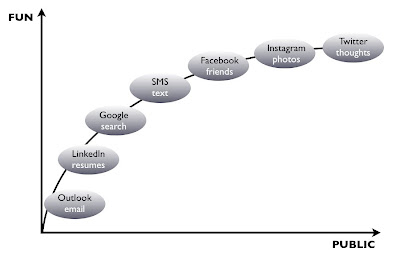 We won’t bore you with predictions of whether Google+, the new me-too social network, will make it. Instead, we’ll suggest Google faces a classic mass-marketing, mainstream-media problem. Branding.

More than 20 years ago Harvard Business School professor Michael Porter wrote the landmark book “Competitive Advantage” (heard the term? the book coined it) and in it he suggested most companies, as they grow, face a classic challenge. They start out as a niche player — a specialist, something that customers can easily pigeonhole in their mind — and then decide to grow. A consulting boutique decides to take on McKinsey; an online bookstore decides to sell all forms of goods. Some companies, such as Peppers & Rogers Group (1to1 consultants), fail to make the transition; others, like Amazon.com (once only online books), leap over the confusion to grow to the next level. Porter suggested the challenge in this transition is to not become “stuck in the middle.”

Stuck in the middle is what happens when you lose your focus, and your correlated customer brand perception of you, and become nothing to no one as you try to grow to the next level. You aren’t perceived as the next big service; yet your customers forget you used to be special. It’s exceedingly difficult to make the leap from specialist to market leader not due to your product-design aptitude, but instead because most consumers don’t give a damn about most products. We all have limited attention spans as customers, and it’s easiest to keep companies, like people, in their place. If you were once known as the maker of Product X, like a girl or guy in high school who gets a bad rap, customers may remember you as That Product X forever.

When a company such as Google, known as the leader in online search, tries to become a social network, human beings get confused. Google+ has hoards of features emulating Facebook, GroupMe, Instagram, and Twitter. So we go hmm. “Where do you fit in this complicated, crowded space?” we ask. We already have locks on where Facebook and Twitter fit. They are snapshots in our mind on the scale of private-to-public, boring-to-fun. Instagram, a newcomer, has rapidly gained traction by carving out a unique position. LinkedIn, the cold porridge of social media, is no fun to visit but you know you need to post your resume there. In the world of communications, specialists rule.

Google+, however, faces a basic challenge. We already know who Google is. Google, we love you, we use you daily … and unfortunately, you’re stuck in the middle.

Bonus points: If you’re not familiar with Michael Porter, get started.

9 thoughts on “Google, stuck in the middle”