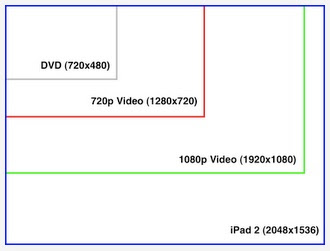 It’s hard to believe but the current iPad you own/are coveting has a lousy screen. Really. You don’t notice it now, but wait until Apple unveils the new iPad 2 in April 2011 with a “Retina” display with 4 pixels per every single pixel on the screen now. Yowza. By offering many more glowing dots per inch, the new tablet model will look photorealistic, the type font serifs as sharp as a glossy printed page. The screen will disappear entirely … and the current model will look fuzzy by comparison. We know, because we own an iPhone 4 whose Retina screen makes the 3GS look like a Hasbro Lite-Brite.

AppleInsider has a nice rundown (brilliant work by Daniel Eran Dilger, really) of the changes in screen resolutions, and the tradeoffs designers must make by either making icons smaller (that is, tighter pixels are akin to moving a TV set further away from you, so everything must look smaller) or doubling up so the images are the same size but twice as sharp. Apple messed up on this choice a bit with the new MacBook Air, a beautifully thin computer but whose 11-inch screen is so tight, the tiny program icons and text are nearly impossible to read. Word is the iPad 2 won’t make the same mistake, but instead will keep objects larger and simply 4x as sharp.

We bet Apple will use the new iPad screen resolution as a competitive differentiator to fend off other tablet wannabes, who perhaps will have more cameras (front and back) or other gizmos, but not a screen where pixels are so fine they become invisible. Apple has to make this move, because the competing Samsung Galaxy Tablet is already sitting in AT&T stores next to iPads, and the Galaxy’s screen thanks to its roughly 50% smaller dimensions — get it? smaller screen size with same number of pixels equals tighter, oh, never mind — appears sharper than the current iPad gen 1. Given the sundry nuances of tablet program/app design, a Retina screen on iPad 2 will give Apple at least two years to fend the fuzzier boys off.

Ah, product obsolescence. It would be crass to think Apple plans things like this.

Update: Daring Fireball’s John Gruber thinks the higher-res screen will come eventually, but not in the iPad 2 update. We’ll see.