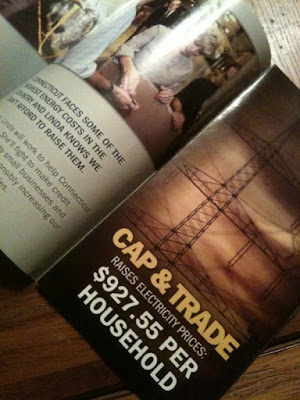 Whatever your politics, you have to admire the U.S. Senate campaign for Linda McMahon, which is warning Connecticut voters that they’ll pay $927.55 more each year on utility bills if they don’t vote for her. That’s the allusion, anyway, in a polished direct mail piece cautioning about proposed cap-and-trade legislation. McMahon bases her claims loosely on two studies, one by the conservative Heritage Foundation that suggests braking pollution could cost the typical American family of four $829, and a more optimistic outlook by the Congressional Budget Office which puts the impact at a few hundred dollars per family, with households in the bottom income quintile even saving money.

Truth aside (this is politics so let’s not worry about that), the piece is brilliant. McMahon is tapping our desire for facts with a hard numeric offer that appeals to human psychology. Direct marketers have known for decades that including a “hook” with a number is one way to boost response rates; consumers are more likely to pick up a mail piece to try to puzzle out whether the deal has positive transaction utility (that is, a good value), and then upon reading it are more likely to take action. Numbers give credence to claims, perhaps because as humans we are overloaded with informational stimulation from the outside world, so we instinctively latch on to any data points with hard clarity. Numbers are filters that help us make judgments by limiting our decision pathways. If we said we were brilliant, you might doubt us, sniffing BS. If we said we had an IQ of 133, you’d likely believe it. Like tall tales about emissions costs, the question is, why does any numeric claim seem more likely to be true?