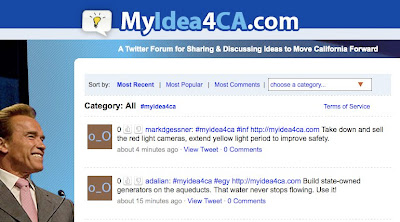 California is dying. If you haven’t heard, the state is in a $21 billion hole after years of voters bringing expensive spending measures to ballot without any requirement of finding funding to pay for them. Thanks to their crazy Constitution, California voters can lock spending in for the future, but taxes to pay for that spending can only be raised if two-thirds of both houses of legislature agree — a near impossibility. If California were a family, the kids would be eating candy every night for dinner while the parents argue over who pays for groceries on the credit card.

So Gov. Arnold Schwarzenegger deserves a hat tip for bypassing everyone and soliciting ideas from the masses via Twitter. California’s new web site MyIdea4CA.com crowdsources potential solutions; anyone can submit an idea by adding the hashtag #myidea4ca to a tweet, and the message will appear on the site for voting up or down by other viewers. Because the site has tweaked Twitter to allow a voting mechanism, the best (or at least most popular) suggestions float to the top. So far California has received 910 ideas from the public, including using aqueducts to generate hydro power, eliminating agencies that are duplicated by the federal government, releasing non-violent prisoners from jail, and, of course, legalizing drugs.

It’s worth pointing out that California is using Twitter as a listening device here, not a PR broadcast vehicle. Instead of pushing out hyperbole about how one party wants to fix things, it’s asking everyone to pitch in their own ideas. Giant organizations in trouble that listen, instead of spin — imagine that.