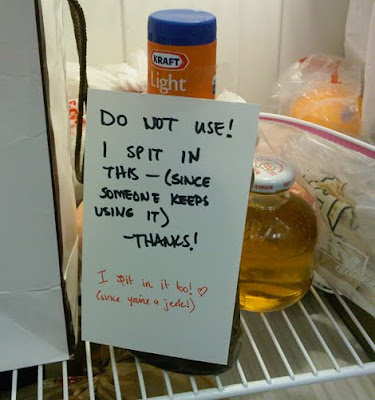 We’ve been watching the sordid healthcare debates in the U.S. with fascination. 46 million Americans still have no health insurance, medical costs are skyrocketing, total spending is on track to become one-fifth of the GDP by 2020, and the younger population does not have the numbers or tax inclination to support aging Boomers. But toss out one whiff that the government will hold death panels to kill old people, and hey, that sounds realistic, and suddenly people are mad.

We won’t say who is right or wrong (although we read pages 425-428 of the actual bill that described end of life counseling and have to say, it’s the basic job description of a social worker). The point we can all agree on is casting seeds of doubt works — as well as spitting in a salad dressing bottle.

Antimarketing works best in politics where you only have to tip a few percent of people in the middle of the spectrum to stop a cause. Political masses act like an inverted pendulum, a tipsy balancing pole with a hinge near the ground that can easily be pushed left or right. Antimarketing also appears in urban legends (remember the early one about not flashing your car lights to someone else at night cause a gang would then come and kill you? Or was that healthcare panels, we forget…). It plays upon our fears. It pushes us *away* from taking an action, and if enough people don’t act, your anti-cause has succeeded.

The puzzle is, why don’t more advertisers try this same thing? We’ve seen whiffs of it — PETA ads protesting animal furs, anti-clean-coal ads showing nasty dust sprayed around a white house. Our favorite is the recent Australian skin-cancer rap, and not just for the swimsuits. But it is very difficult to push consumers away from buying objects, because the magnetic attraction of food/sex/shelter/status/signaling overrides any counter argument rather easily. We’d be fascinated to see more antimarketing in the real marketing world. Would it work? You fight so hard to attract customers to your product; what happens if you push them away from a competitor?

Image: We Made This

1 thought on “Antimarketing: If it works for health care, why not you?”