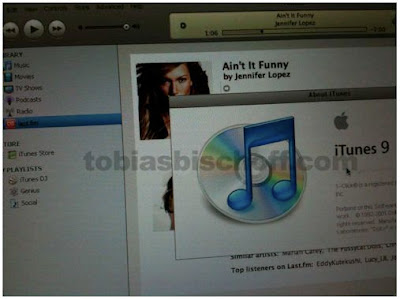 This one’s for the Apple fanboys. A German blogger has posted screen shots of what appears to be a newly planned icon in the popular iTunes interface marked “social” — at left in shot above — so you can share music with your friends on Twitter or Facebook.

While this could be a Photoshopped crock, it points to the future Charlene Li has been riffing about for a year now: that social media will become like air, a utility similar to wall outlets that you plug into. The idea of human relationships being tied down by specific portals such as Facebook or Twitter is comical when you think about it. After all, it’s your life and contacts — shouldn’t you own your social graph? Eventually human networks powered by technology will disengage from specific applications and instead be a cloud than any program or device can access. Swipe your finger in 2020, technology recognizes you, and the bar tabletop at the hip club in New York City can broadcast your fun to all your 20,000 remote friends. Add in GPS and chips that cost as much as sand, and everyone you want can follow you everywhere as soon as you toss the virtual switch.

The challenge will be setting up logical filters so your boss doesn’t hear about the party. Perhaps you’ll simply set up friend playlists, just like your music controls now, so you can play to the world depending on your mood — hip, sexy, family, work. It’s coming. Just ask Apple … or the bloggers who mock up the fake products Apple will eventually make.