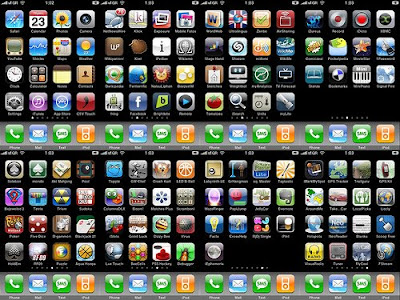 Much has been written about mobile advertising, usually “it’s almost here! really!”, yet one basic challenge remains — handsets are cluttered with multiple web interfaces, and the problem is growing exponentially as new smart phones such as the iPhone allow anyone to load thousands of app buttons to get services online.

So many doorways. How will advertisers intercept them?

To understand the challenge, consider that the common web browser for computers created a single doorway that allowed certain advertising companies to thrive. The reason Google was able to gain a stronghold on internet advertising is that personal computers have only one interface to get online — the web browser. Google could become a popular search portal because everyone could easily find it within the common browser.

Ah, but mobile is different. The iPhone and Google’s own Android system enable users to load cell phones with apps — software applications for checking stocks, the weather, directions, retail store prices — and each button is a separate on-ramp to the internet. How will advertisers intercept users if users are taking a million different doorways online?

Brian Wieser, global director of forecasting for Magna, recently said U.S. advertisers will spend $229 million on mobile marketing in 2009 vs. $169 million in 2008. But he noted the market remains a “highly fragmented group of divergent advertising models collectively organized around portable media.” Exactly.

2 thoughts on “A little app problem for mobile marketing”